Just fancy, in 1938 these young women were taking on the Hospital hierarchy and the Health Minister to get their publication, the 'Coast Chronicle' printed and circulated.

In October 1938, after the Coast Hospital had its name changed to the Prince Henry Hospital, the NSW Minister of Health, The Honorable HP FitzSimmons congratulated members of the nursing staff on the development and publication of their 'Coast Chronicle'. Nurse authors and others were encouraged to submit work related stories, life stories and other material for publication. Even the Health Minister had a view and noted the historical significance of such an endeavour created and developed by the forthright nurses of the Prince Henry nurses of the day. The Minister himself suggested, that 'constructive criticism can be most helpful, but destructive criticism is both futile and harmful…' (Coast Chronicle, 1938). The written work of the nurses was supported by volunteer editorial and publishing staff. In addition, these nurses endured a very heavy study and work demand, due to no real Industrial Act that controlled hours worked in shifts.

As a consequence of the new four-year study duration of clinical and study work to become a trained nurse (commenced in 1913 with 98 nurses on staff), the curriculum was broken up into unequal content areas with foundation anatomy and physiology being introduced in the first year, and subsequent progress through a variety of topics, including a heavy emphasis on infectious diseases. Prior to this, training had been ad hoc at the Coast Hospital. All nurses wishing to become registered at the NSW Nurses Registration Board (first to be established in Australia) had to sit their final exams at the University of Sydney in The Great Hall, built in 1851.

Each class publishing the Coast Chronicle was represented as follows:

The writer of the first editorial featured in 1938 encapsulates the mood of the day:

'How frequently as we go through our four years of training are we tempted to give up! The first year seems such drudgery and the goal is so far away. But if we stopped to think we would realise that as we go on the work becomes more interesting, our responsibilities increase, and unconsciously we are carving a niche for ourselves in the professional world.

The gaining of knowledge and a career is perhaps the main reason why girls take up nursing, but in the community life of a large hospital the character is developed, as well as the mind.

Submission to discipline is essential, kindness and thoughtfulness to one another, and last, but not least, loyalty to those in authority and to our training school. Not only is this necessary whilst we are training in hospital, but also when we leave and follow that branch of our profession which appeals to us most. It is by our actions that we cast credit or otherwise on our training school, and the Prince Henry Hospital is known throughout the world, and one with which we are proud to have been associated.

It remains, therefore, to us here at present, and those who will be passing through in the future, to carry on the ideals which are not only those of our training school but also of the British Empire.' (Coast Chronicle, 1938, p6)

An author in 1938 submitted an attractive photo of the fully grown Norfolk Island pines lining the road down to Lazaret (to the left of where the Chapel is presently built and quite close to the old Marks Pavillion) to the Coast Chronicle. The original specimen Norfolk Island Pines were planted in 1896 at 'the Coast'. During the 1800s to 1890s, settlers attempted to make the environment in Sydney aesthetically attractive with Norfolk Island Pines planted in other parts of Sydney too, in addition to the Coast, such as old parts of Manly, and the Quarantine Station. Seeds for planting were brought over from Norfolk Island by transport ships travelling the Sydney-Norfolk Island journey. Those of us who have had a special experiential relationship with 'the Pines' remember the special characteristics, not always appreciated by those coming off-duty at 11pm, trying to hold down uniform and cap and scramble to safety in the nurses homes with a vigorous wind attempting to control their destiny. In winter, particularly, we were battered by a swift, cold wind that was particularly unpleasant as the on-shore gale whipped up a melodious song from 'the Pines'. Some nurses even proposed we were being hit with ice, so cold was this upon our faces. Memories go back to accompanying a dead body on a morgue trolley through 'the Pines' late at night and how scary it was with the whistling wind.

A further submission to Coast Chronicle is the following poem:

O Lord, my God! This work I undertake,
Alone in Thy Great Name, and for Thy sake.
In ministering to suffering I would learn
The sympathy that in thy heart did burn.
Take, then, mine eyes and teach them to perceive
The ablest way each sick one to relieve;
Guide thou my hands, that e’en their touch may prove
The gentleness and aptness born of love.
Bless Thou my feet, and while they softly tread
May faces smile on many a suffering bed,
Clothe me with patient strength all tasks to bear;
Crown me with hope and love which knows no fear;
And faith, that, coming face to face with death,
Shall e’er inspire with joy the dying breath.
All through the arduous day my actions guide,
And through the lonely night watch by my side;
So shall I wake refreshed, with strength to pray.
Work through me Lord, through this and every day. 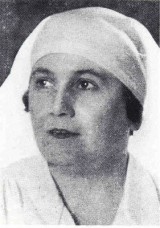