Little Bay as a 'sculpture'

When completed in 1969, Wrapped Coast – One Million Square Feet, Little Bay, was the largest single artwork in the world. It was also the first environmental project created by the iconic artists Christo and Jeanne-Claude.

Resembling a strange arctic landscape, the creation of New York artists Christo and his wife Jeanne-Claude swathed two and a half kilometres of the northern side of the Little Bay coastline with its 26 metres high cliffs in 90,000 square metres (1 million square feet) of white fabric and rope measuring 56 kilometres.

Fifteen professional mountain climbers, 110 labourers, architecture and art students from the University of Sydney and East Sydney Technical College, as well as a number of Australian artists and teachers, spent four weeks climbing, wrapping, sewing and securing the work. The expanse was so vast that no one vantage point allowed a complete view. Instead, visitors walked for an hour to cross its surface. Christo favoured the view from the water line.

The project was financed by Christo and Jeanne-Claude themselves, through the sale of Christos’ original preparatory drawings, collages, scale models and lithographs of their earlier installations.

The then administrator of The Prince Henry Hospital, JR Clancy, permitted the use of the land on the proviso that a minimum admission fee should be charged and all proceeds donated to the hospital.

The coast remained wrapped for a period of 10 weeks from October to December1969. The materials were then removed and recycled. The site, which many thousands had visited, was returned to its original condition with no hint of the artistic extravaganza gone before.

Somewhere between a monument and an event, Wrapped Coast was an extraordinary project that changed perceptions and had an enormous impact on art in Australia. 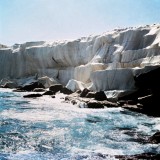