There is a significant association between sporting identities and Prince Henry, with many familiar names and famous people appearing throughout the hospital's history.

With such a unique coastal location many staff at the Prince Henry Hospital were able to enjoy swimming in Little Bay’s placid waters. Among them was the then Medical Superintendent, Dr Reginald Millard – our very own Millard Drive was named after him.

Endurance races across the bay, lasting for two to three hours, were commonplace and well patronised by many of the resident medical officers. The keen interest in swimming by Dr Millard and his colleagues may well have been motivated by Dr Keith Kirkland, an Australian Olympic freestyle swimmer.

Keith Lindsay Hugh Kirkland (1900-1971) trained and worked at the Prince Henry Hospital. He was a member of the Australian Olympic relay team, winning the silver medal in the 4 x 200 metre freestyle relay at the 1920 summer games in Antwerp, Belgium. Dr Kirkland, a urologist, would later become instrumental in the installation of Australia’s first artificial kidney unit at Sydney Hospital.

Prince Henry Hospital was a not only a highly regarded and much respected training hospital, it was also a leading centre for the treatment of spinal injuries and sports rehabilitation.

In 1988, champion cross country skier, Janine Shepherd, was hit by a truck when training on her bike in the Blue Mountains. She sustained severe life-threatening injuries and spent many months at Prince Henry Hospital recovering and undergoing rehabilitation. With great determination and perseverance Janine overcame her injuries and, with her personal philosophy, 'If I can’t walk, I’ll fly', she did just that. Janine went on to become the first female director of the Civil Aviation Authority, as well as a best selling author and international speaker.

Many injured sportsmen and women arrived at Prince Henry Hospital in rescue helicopters, landing on what is now the Macartney Oval before being transferred to the accident and emergency unit nearby. Macartney Oval, located adjacent to the intersection of Anzac Parade and Jenner Street, owes its name to one of Australia’s great cricketing legends, Charlie Macartney.

Charles George Macartney (1886-1958), was born on 27 June 1886 in West Maitland. He was known as ‘The Governor-General’, which referred to his authoritative batting style and flamboyant stroke play. Comparisons were drawn with his close friend and revered role model Victor Trumper, who was regarded as one the most elegant batsmen in cricketing history. Even the great and feted Sir Donald Bradman was in awe of his skills, citing Macartneys’ dynamic batting as an inspiration in his own career.

Charlie was considered one of the most brilliant right-handed batsmen in the history of Australian cricket. Daring and confident, he possessed a quickness of eye, hand, and foot, as well as perfect timing, all contributing to him becoming a menace to even the best bowlers.

After war service in France with the Australian Imperial Force, in the 3rd Division Artillery, Macartney resumed his test career, representing Australia between 1920 and 1927. He famously scored a record breaking 345 in under four hours, batting against Nottingham in 1921, earning a place in Wisden’s Cricketing Almanac the following year.

Charlie Macartney worked at the Prince Henry Hospital as a personnel officer during the late 1940s and early 1950s, during which time the then Medical Superintendent, Dr Walters appointed him curator of the hospital’s cricket oval, now the Macartney Oval.

Macartney died of a heart attack on 9 September 1958, aged 72, while working at Little Bay. He had no children and was predeceased by his wife Anna, whom he’d married in 1921.

In February 2007, Charles George Macartney was posthumously inducted into the Australian Cricket Hall of Fame. 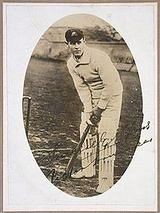