CLICK HERE for an update on what's being done to repair the clock and arrange ongoing maintenance for the clock, the clock tower, and all other heritage built items at Prince Henry. The main aims of the game are:

About the Clock Tower

The original clock tower has an interesting and unusual history. The clock itself is no ordinary time piece, but an aristocrat with a past.

Manufactured in 1878 at Blenheim in Germany, the clock was brought to Australia for the Sydney Exhibition of 1879. A disastrous fire destroyed the Exhibition however the clock was salvaged, unharmed and intact.

After a brief time in Sydney’s Botanic Gardens it was sent to Bourke for use as the town's clock. Eventually it made its way back to Sydney and was kept in government stores until it was decided that it would be a suitable addition to The Coast Hospital.

In 1898 the clock was mounted in an ’artistic‘ tower built by Henry Tucker Jones.

The clock tower was constructed from wood and corrugated iron. It was unconventional in that not only did the lower part of the tower support the upper part, it also acted as a meat safe.

Presiding over the busy routine of the hospital, this intriguing clock tower rang out its melodious hourly clang until it was demolished in the 1930s as The Coast Hospital began to undergo a major transformation.

The clock was stored at the hospital until 1953 when it was later installed in an elegant three storey high, square, brick tower complete with a copper roof and wind vane. Located in full view of the hospital gates and adjacent to Ward 1 (now The Flowers Ward), is where it still stands today.

The clock tower was dedicated to the memory of two air force officers, Flying Officer Norman F Dwyer and his cousin Wing Commander Stanley G Stilling, DFC. Both were killed in action during the Second World War. Mr W Dwyer, father of Norman, was at one time a manager of the hospital.

A Coast Chronicle – The History of the Prince Henry Hospital, CR Boughton. 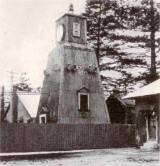 The old clock tower with ventillation 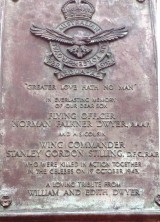 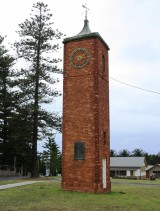 The RAAF Memorial Clock Tower as it is now