In 1981, a number of sites within Prince Henry were listed on the Commonwealth’s Register of the National Estate, and were to be protected under the Prince Henry Master plan. Included among them, was the Sewing Room.

Originally located on Ewing Avenue, between Pine Cottage and the present day Coast Centre, the Sewing Room began its active life in the 1890s. Today, the memorial sculpture on Ewing Avenue is believed to be at the approximate location of the original Sewing Room.

The building had various uses over the years including the Nurses Dining Room, the Nurses Lecture Hall and, later, the first Nursing and Medical Museum which opened in 1991.

In the mid-1960s the Sewing Room was relocated to Lister Avenue. The building which was, at that time, widely referred to as the Sewing Cottage, unfortunately burnt down in the early stages of Prince Henry’s redevelopment.

In its place today, set on a picturesque viewing corridor facing the golf course and the ocean, is a stylised sculpture depicting a treadle sewing machine. The sculpture commemorates the building and the efforts of those who worked there. You'll see the inscription refers to the Sewing 'Cottage', though those who worked in the hospital still fondly remember the Sewing 'Room'.

The Sewing Room dealt with all things related to sewing, from general repairs to staff uniforms and the making of bed linen such as pillow cases, draw sheets etc, to the making of some nurses' uniforms.

In 1894, Matron Jean McMaster introduced an official nurses' uniform when she established the Coast Hospital Training School for Nurses − initially with a three year training course, and subsequently becoming a four year course. The trainee nurses, were sent either to David Jones or Farmers, in the City of Sydney, clutching a swatch of material and with a letter from the hospital, to have their uniforms made.

In later years, Prince Henry nurses' uniforms were made on site, many of those by the wonderful Miss Winifred C Giles. Miss Giles was a trainee nurse as well as the Head Seamstress from 1925-1969. She served the hospital faithfully for 44 years.

When the hospital finally closed its doors in 2003, the Sewing Room sadly ceased to be of service. Today, when we visit the memorial sculptures on Ewing and Lister Avenues, we can spare a thought for those who toiled away in the Sewing Room.

Many thanks to the wonderfully patient Lyn Smith from the Prince Henry Hospital Trained Nurses Association. Her vast knowledge of Prince Henry's history and heritage has been invaluable.

The site of the original Sewing Room on Ewing Avenue 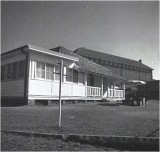 The Sewing Cottage at Lister Avenue 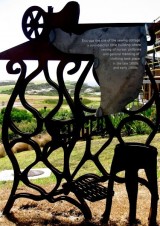 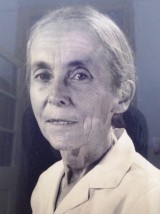