What's in a name?

The wrecking of the Malabar will forever be remembered in Sydney's history, as the suburb of Long Bay was renamed Malabar after the ill-fated ship.

The name was adopted sometime after the wrecking, but it was not until June 1977 that the NSW Geographical Names Board officially approved the name Malabar for the suburb.

On 2 April 1931, the MV Malabar, a passenger and cargo steamer captained by George William Leslie, violently struck the headland at Long Bay south of Sydney while making its journey from Melbourne to Singapore via Sydney.

In thick fog the Malabar hit the rocks about 50 metres inside the northern headland of Long Bay. Captain Leslie immediately put the ship full speed astern but the Malabar was well and truly stuck on the rocks.

Captain Leslie stopped the engines and ordered the ship be evacuated. Within half an hour, all the passengers and the Chinese and Malay crew members (there were 63 Chinese and 26 Malays among the 108 crew) were put ashore by lifeboats. Three valuable stud horses being shipped from Melbourne to Darwin were swum ashore. The only life lost was that of the ship's cat Florrie which refused to leave the stricken vessel.

'There were two principal places of amusement (in Sydney) on the Good Friday holiday – the (Royal Easter) Show and the Malabar – and it appeared that everyone went to both', said the Sydney Morning Herald on 4 April 1931. The Daily Telegraph and the Herald reported that on 4 April, Good Friday, 150,000 people visited the site of the wreck.

People set up booths selling fruit, sandwiches and soft drinks. Photographers sold photos of the wreck and musicians busked. Thirty police were on duty keeping the crowd in order, together with another eight traffic police who controlled the cars.

The ship had completely broken up earlier that day in heavy seas and the cargo was washed into the sea.

The newspaper reports tell stories of people salvaging goods from the coastline between Sydney and Newcastle, and even in Sydney Harbour. The Herald relayed the story of some young men who risked their lives to salvage a keg of beer from the sea near the wreck.

In April 1931 Captain George Leslie was charged with failure of duty and found guilty before the Court of Marine Inquiry.

It wasn’t until the late 1950s and '60s, with the introduction of scuba diving, that objects were salvaged from the wreck.

Today the wreck site continues to be visited by divers from all over the world.

www.michaelmcfadyenscuba.info/viewpage.php?page_id=68
www.dive.hemnet.com.au/wrecks/malibar.htm
From Long Bay to Malabar : a village by the sea – Patrick Kennedy

The Malabar during trials on the Firth of Clyde, Scotland

The Malabar soon after hitting the rocks at Long Bay 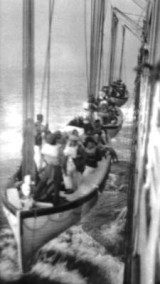