Save Yarra Bay | The Save the Bay Coalition

For up-to-the-minute information on the Save Yarra Bay movement and how you can help, go to:

UPDATE: The Yarra Bay Protest Flotilla has been postponed until the Government's ban on public gatherings is lifted

David Shoebridge, Member of the New South Wales Legislative Council, addressed the Legislative Assembly requesting (and receiving) support for the release of the Draft Business Case into the proposed mega cruise ship terminal at Yarra Bay.

'...Forcing the Government to release the Draft Business Case into the Yarra Bay monster cruise ship proposal — we want to know if they considered the CATASTROPHIC damage this will do to marine life, and did they consider sites like Garden Island (or would that ruin Malcolm Turnbull's view of the bridge?)'

Just click on the images you want, download and print as many copies as you have room to display.

Community consultation over the destruction of Yarra Bay – WHAT A SHAM! | December 2019

As with many of us who also attended the 'Community consultation' sessions at the Prince Henry Centre, the resident was very concerned and frustrated at the lack of relevant information, and the unsatisfactory responses to pertinent questions and requests.

The response received from the Port Authority was astounding in its dismissal of the email's contents, questions asked, information requested, and the deep concerns of the author.

The following salient points in the Port Authority's boiler plate reply may be of no surprise to those of you who've already objected and received your own response:

Linda Clark, a resident from the Cayman Islands and has also lived in Sydney, posted the below piece on the Save The Bay Coalition Facebook page. BBC World News covers the issue very well. The parallels are scary.

Questions that spring to mind are:

Ordinary people can make a difference by supporting the Save The Bay Coalition, attending rallies, writing letters, etc.

Thank you for adding me to your group. I am from the Cayman Islands and I was made aware of your plight on a social media post I made regarding our own mass destruction of coral reefs for a mega-cruise pier for Royal Caribbean and Carnival lines ships.

I had the wonderful experience of living in Sydney for 18 months, ten years ago, and Australia remains close to my heart despite my geographical distance.

In Cayman the ships currently arrive and tender to shore where we successfully received 1.9million passengers in 2018. Apparently according to the cruise lines this is an enjoyable experience but piers are 'better' for the passengers. But it seems they made a bad design decision with their Oasis class fleet, not designing the doors appropriately to enable passengers to disembark via tender. This price they seem to want Cayman's coral reef ecosystem and local populations to pay for, rather than the execs who made that bad decision.

There is no business case for the Cayman Islands to support this mass ecocide and long term devastation to our stay-over tourism market nor reliable environmental impact assessment information and we have other examples in the Caribbean of false promises of economic growth and environmental mitigation techniques totally failing which clearly validate our grass-roots concerns. Unfortunately the local government has what can only be presumed, too much personal gain, from this project to act in the best interests of our Country and is instead hell-bent leading us into this race to the bottom, answering to the cruise lines and not their constituents.

I am very interested to share information with you on the situation there and here in order to see if we can raise the profile of both situations which are mirroring each other, as well as techniques/methods of protest which seem to prove useful in strengthening the power of the local communities who are directly impacted by these huge projects which no-one wants except for specific vested interests.

I share recent press coverage from the BBC in order to provide a brief summary of what is going on here with our grass roots campaign to halt this project.

Destroying the Cayman Islands for their megaships (primarily being shoved down our throats by Royal Caribbean) clearly is a huge priority for these cruise lines who appear to have a lot more to lose than we do, sending their 'big gun' CEO's to our tiny little island to mis-lead the local population to support this project is very fishy.

There is also a current project in the works by Disney at Lighthouse pt, a Marine Park in the Bahamas, being protested by locals there.

These cruise lines can not continue to destroy the world over of our valued natural beauty, vital ecosystems and ignore the local social impacts of their greed. 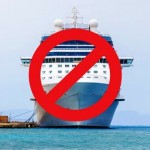 First of all, a big 'THANK YOU' from the Save the Bay Coalition to all the good residents of the area and many other allies for your ongoing support! YOU ARE the campaign and we couldn't to it without you.

The campaign to save beautiful Yarra Bay from the state government's egregious plans to build a mega cruise ship terminal has been ramped up in recent months. More than 1300 people attended the community forum organised by our local MPs and Save the Bay Coalition on 17 November at the Yarra Bay Sailing Club.

A number of stakeholders addressed the Forum in support of the campaign including:

The general agreement on the day as well as before and after the community forum is that a YARRA BAY CRUISE LINER BASE WOULD BE A DISASTER ON ALL FRONTS. Building a cruise terminal at Yarra Bay/Molineaux Point in Botany Bay is not the solution to Sydney's cruise capacity constraints — the Government and Port Authority, as well as many experts from varying fields, are well aware of this fact. The NSW government's $600 million proposal does not stack up on environmental, cultural or public safety grounds.

Save the Bay Coalition summarised its objections in a revealing opinion piece in the Sydney Morning Herald on 19 November 2019.

The Port Authority has also failed to release the results of the preliminary strategic business case. The next public consultations are scheduled to take place after the business case has been finalised, providing no opportunity for the community to submit meaningful feedback from an informed base.

The Port Authority has provided the following indicative timeline for the project:

What can we ordinary people do to help?

Developments occur daily, so please keep in touch by following the Save the Bay Coalition on Facebook and checking in on the Save Yarra Bay website for updates.

Check out the Take Action page on the Save Yarra Bay website. There's lots that each one of us can do to make a difference with very little individual effort. Importantly: keep writing to Andrew Constance, the Premier, and the Prime Minister.

If you've any questions or ideas to share, please email Maria Poulos or Cheryl Rennie at saveyarrabay@hotmail.com, or visit:

Maria Poulos from the Save Yara Bay Coalition has been tireless in her protracted efforts to prevent mega-cruise ships from destroying Yarra Bay and surrounds. Maria has kindly taken time out of her very busy schedule to provide this piece for our website, to update Prince Henry residents and neighbours on recent developments. And to provide details on how each of us can help.

The campaign to save beautiful Yarra Bay from the state government's egregious plans to build a cruise terminal have been ramped up in recent days. A community forum will be organised by our local MPs and Save the Bay Coalition for 17 November at the Yarra Bay Sailing Club (times to be advised).

The Port Authority of NSW has released its timelines and plans for consultations. We encourage everyone to visit the Your Say Cruise Capacity web page and make your views known.

The Port Authority  says it wants to 'consult' with the community and other stakeholders regarding its proposed Yarra Bay or Molineux Point mega cruise ship terminal. However the Port Authority continues to balk at providing the essential ingredients of successful consultation: meaningful information about what they propose to build. It has not released its preliminary studies that have deemed the terminal techinically feasible.

In response to Tthe Port Authority's invitation to a meeting, the Save the Bay Coalition has requested:

Until we know what the Port Authority proposes to build, it cannot be said that we have been consulted.

Should the Port Authority refuse to make the information available, we will make it clear that they will be imposing a cruise terminal on the community without having obtained any social licence for it.

Developments occur daily, so please keep in touch by following the Save the Bay Coalition on Facebook and checking in on the Save Yarra Bay website for updates.

What can we do to help?

Check out the Take Action page on the Save Yarra Bay website. There's lots that each one of us can do to with very little effort.

Phone calls, emails and letters are ultimately more effective than dropping pins on maps and responding to the Have your Say page on the Port Authority Website. The Port Authority website "Have your Say" is designed to filter and dilute the public disruption/anger as they proceed with their market soundings with industry. You will be unlikely to get a response on this website. Copy your responses to both the Minister AND the website (not to discourage you from also posting on Port Authority website). 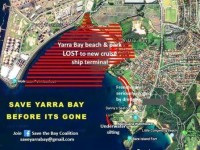 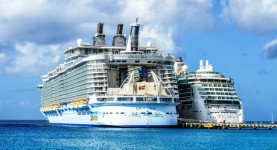 The Save the Bay Coalition explains to the Prince Henry Community their grounds for opposition to a cruise ship terminal at Yarra Bay.

Thousands of residents, many businesses, our two local Councils (Randwick and Bayside), as well as other stakeholders are united in opposition to the New South Wales government's evaluation of Yarra Bay as a location for a mega cruise ship terminal. We are joined by our Federal and State Members of Parliament (Matt Thistlethwaite and Michael Daley) and the La Perouse Aboriginal Land Council, the traditional custodians of the land.

Yarra Bay is in a direct line to the ocean and huge swells can roll into the bay at any time of the year. The existing breakwater that shelters ships at Port Botany is west of Yarra Bay and would not protect the proposed terminal. A terminal in Yarra Bay would require massive investment in new breakwaters and other engineering works to protect gigantic berthed vessels from the effects of waves and wind. Read more...

The Save the Bay Coalition is appealing to local residents to support its important campaign opposing this unrealistic proposal from the NSW Government. Everyone understands the need to find a solution to cruise industry port constraints in NSW. However, a terminal in Yarra Bay or at Molineaux Point is not the answer.

Read the full story from the Save the Bay Coalition.

Are you able to offer expertise or advice? If you feel passionately about this issue as The Save the Bay Coalition does, and would like to become involved in the campaign to Save Yarra Bay, please email Maria Poulos or Cheryl Rennie at: saveyarrabay@hotmail.com.

Save the Bay Coalition is on Facebook at: https://www.facebook.com/groups/SaveYarraBay/.

How to lodge your objection

If you lodge your objections via the respective parliamentary office contact portals for each of the relevant ministers, you should receive a formal acknowledgement, whereas objections to electoral office email or mailing addresses may not be acknowledged. You could try both.

You could create your own objection or copy and paste/cherry pick from the following sample letter of objection:

The links for the parliamentary offices and The Port Authority email address are as follows:

If you've any questions or ideas to share, please email Maria Poulos or Cheryl Rennie at saveyarrabay@hotmail.com, or visit: